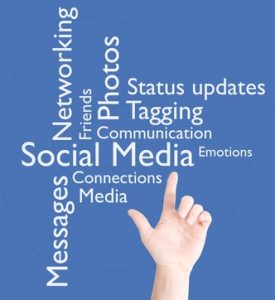 Social media is proving to be a popular networking and recreational activity, with much emphasis and research being placed on the role that it has in the business environment to develop new lines of communication with current and potential customers, while implementing innovative marketing approaches. Nonetheless, two recent events which have hit home for all Cantabrians are the devastating series of earthquakes and mayoral elections. But what role or function did social media play?

Following the largest earthquake that has been recorded in New Zealand in the last 80 years, weaknesses in traditional media’s ability to react to emergencies and provide vital information to the public have been exposed. Hours after the quake, a report was featured on Sky News Australia, with New Zealand based television and website news agencies being similar in their response times. With many communication channels down and a public plea to limit the use of mobile phones to emergency calls only, many New Zealanders flocked to social media sites such as Facebook and Twitter to check on friends and family, while gaining vital information from emergency services. Messages on Twitter came flooding in soon after the initial earthquake, with many news agencies following such user generated content to develop their stories and headlines.

Furthermore, in the days and weeks following the initial earthquake, New Zealanders have utilised a vast array of social media sites to share their experiences, offer assistance to those in need, post images and videos of the damage; providing a communication platform to rally the community into action. According to Nielsen, over 27,000 comments were posted on social networking sites and message boards during the days following the earthquake, as those affected used the communication channels to connect with family and friends. Twitter received the highest overall volume, with New Zealand based message boards, such as Trade Me receiving similar results. According to Tony Boyte, Research Director for Nielsen’s online division, “the dramatic numbers we’ve seen in social media usage demonstrates the platform’s ability to quickly and effectively collect and disseminate information.”

During the midst of the earthquake was the highly publicised and contested Mayoral election in Christchurch. Prior to the disaster, the poles were showing an advantage to leading contender, Jim Anderton. However, the public support given to Bob Parker in managing the aftermath, along with the media coverage that ensued, appeared to sway the public’s vote. Anderton believed that without the quake the result could have been quite different. “There was seismic change and it reflected the television, radio and media presence of the mayor against all others – and people assumed wrongly because you weren’t on the 6pm news you weren’t doing anything,” Anderton said.

The role of social media can again been seen to play a pivotal role. With the high media coverage of the event, both in traditional mediums of communication and social media, the community rallied behind a mayor who was prepared to stand up and be counted in the days and weeks of the aftermath. The continued presence of communications based around the earthquake in social media networking sites vicariously put Bob Parker squarely in the hearts and minds of all Cantabrians. Based on correlations between social media usage and political and civic participation, the effect of this is hardly surprising.

Research conducted by Pew highlighted that over 31% of all users on social networking sites engage in some activity with a civil or political focus. Furthermore, it was identified that 15% of all internet users wrote comments on websites about civic, political and social issues; or uploaded images and blog posts with content relating to politics or social issues. However, what was profoundly evident in the study was the implication for young adults, between 18 and 29, who were far more likely to engage within a political environment through social networking sites. With the earthquake creating a high profile event which encouraged the use of social media for communication and engagement purposes, the mayoral race is sure to have been affected.

This has brought to the fore the innovative use of social media in other countries to engage with the public and actively involve them in the political process; something that all politicians and government agencies in New Zealand should take note of. Just as social media has opened a dialogue between businesses and consumers, its value is apparent to those in political office, whose work and very professional survival hinges on the needs and perceptions of their constituents.

As it stands, the social web is ripe with opportunities for candidates and office holders alike to connect with voters, foster transparency, and even spar with opponents in the same ways they have been in the traditional media. Politics is about conversation, and personal, face-to-face interaction is still the foundation of that, especially at the local level. However, to advance the conversation and mobilise community support, social media is becoming a staple of the political tool box. Facebook, Twitter and other social networks reinforce political messages and fuel offline support. Furthermore, social media provides a way for politicians to carry on a real time narrative directly with their constituencies, particularly the younger generation, at an affordable cost.

There are additional implications as to how social media and networking sites can be use to encourage participation in the political process. Representative democracy seems the perfect place for social media — a direct communications channel between the governed and the government. One example of such interaction was implemented in the States, where the House Republicans created their own social media hub, termed YouCut; where participants can suggest and vote on which government spending programs should be cut from the federal budget. This represents the first time in history where the public is able to have direct impact on what their representatives vote upon on the House floor. In another example, the campaign run by the Enough Project, an organisation pushing for regulation on the U.S. import of conflict minerals from eastern Congo, encouraged their followers to voice their opinions on social networking sites. Within 48 hours, approximately 500 people posted on the Facebook walls of these members. Soon after, two of the 10 members agreed to co-sponsor the bill and another three members of the committee who were not targeted also agreed to co-sponsor.

The recent events in Christchurch, which has affected all of New Zealand and many ex-pats living overseas, has highlighted the role of social media in communities. Firstly, social media provide vital communication tools to inform the community and create opportunities for civic engagement; and not only in time of emergency. Secondly, traditional media is slow to react to dramatic and sudden events where the general population require information relating to the situation and the status of their friends and family. Last, but not least, the increasing importance of social networking sites in creating engaged political communities, especially for the younger generations. Hopefully some of the examples for participative government will be implemented and soon your voice will be heard.