The Future’s Bright Down South 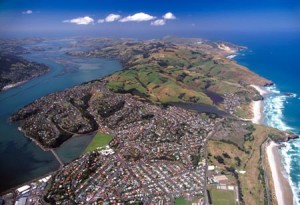 It’s been over a year since I first landed in New Zealand and not much less since arriving in Dunedin. From the outset perhaps not the most popular destination when deciding to move from the other side of the world, even more so when considering my roots being firmly placed in the hospitality & tourism industries. Some colleagues and friends back home highlighted the innumerable opportunities that Auckland or Christchurch would present, whilst others certainly did their best to sway me towards the smaller tourist Mecca’s that are Queenstown and Rotorua. In fact, looking back, I don’t think that Dunedin was mentioned at all.

Our decision to head for Dunedin was made through the offer of support from long standing family friends who had emigrated here in the early 00’s. Although it must be admitted that Erin, my partner, also found it slightly comforting to read of Dunedin’s strong Scottish roots – this being her first move away from Scotland.

It wasn’t long after arriving that I took up my position at St Clair Beach Resort, a new property not only offering a great opportunity to me but also to the city of Dunedin. The city’s most noted premium property – Corstophine House had closed just a few weeks before the hotel’s opening. In so many ways St Clair Beach Resort was the right product at the right time for Dunedin. The resort has been popular amongst visitors to the city, also to local’s too, with over 5% of hotel residents coming on a ‘staycation’ from within the Dunedin city boundary! We are often told by these guests that the resort has helped them to see Dunedin as a place people want to go, not just need to go.

Hence my prompt for writing this blog post. I believe, for Dunedin, 2011 could be a great year – the year the city becomes a place that the rest of New Zealand will realise as a top destination, not only to international tourists – but to domestic travellers too.

The central protagonist in this tale of success will be the opening of New Zealand’s first roofed stadium. Where is that stadium? Not Auckland, with its population of 1.3 million; not Wellington, New Zealand’s capital and not even Christchurch, the South Island’s largest city. Dunedin.  The Forsyth Barr Stadium will host rugby and other sporting fixtures as well as cater for conferences, music acts and other major events. Finally a sizeable venue, putting Dunedin in the running for major national and international conferences. It has recently been announced that Sir Elton John will be the first major act to perform at the stadium in late 2011, a performer that will undoubtedly draw the crowds.

September and October will of course be a big months for all of New Zealand, particularly those cities directly involved in the Rugby World Cup. Of which Dunedin is one, hosting three games, six teams and a multitude of peripheral events. The third-biggest sporting event in the world, the Rugby World Cup certainly draws world-wide attention everywhere it goes. In its entirety the tournament has an estimated television audience of more than four billion people with an estimated 85,000 international visitors choosing to travel to New Zealand during this time. As well as the additional income widely spread throughout the local economy it is also a great opportunity to market the city across the globe both through publicity and in creating thousands of ambassadors from those who choose to come to Dunedin.

Coupled with the rapid growth of Dunedin’s cruise industry, renovations to the Dunedin Town Hall conference centre, restoration of the Chief Post Office into a quality hotel, various operator led product development projects, a shiny new ‘Dunedin’ brand as well as expansion to two of the city’s existing hotels I’m sure you will see my reasoning for the title of this blog post.

Here’s to a happy new year!

One thought on “The Future’s Bright Down South”