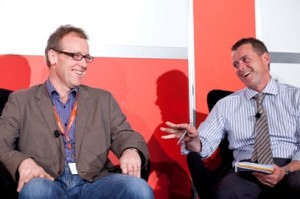 Last week I headed off to Sydney to attend Martin Kelly’s Traveltech – the sister conference of No Vacancy. The conference was entitled “Best of enemies” and was competitive and fun.

There were 4 topics that are worth revisiting.

Nothing seems to polarise opinion like the daily deals and travel, so I really enjoyed this debate. Clearly a large number of people don’t believe that the model is relevant or appropriate for travel – especially in regards to margin. Most daily deal sites take a high margin (often 50%) and require a huge discount on top.

Some of the interesting facts …

Note: to a room full of men this appeared entirely logical, “how many facials could you really purchase” to which I mentally calculated that for many women – far more than holidays.

To me the most interesting thing was that the travel sites were playing by traditional travel rules – travel is sold in a particular way and they conformed and worked within that – namely to be able to get a steady supply of deals. In contrast, Spreets came across, not in an arrogant manner, but free from constraints as to how it was done. Their take – it’s a great advertising and sales opportunity – plenty of people willing to play, so take it or leave it. I guess that’s the luxury of having an audience of 2 million a day.

Fascinating that the mobile discussion was being run by activities and insurance companies, not your traditional OTA’s, but this is where the innovation was. World Nomads, an insurance company, belief was that to be successful in mobile you needed to do something different and appropriate for the medium. So selling insurance services, boring – running a Q and A between all the customers that have bought insurance, interesting.

I thought these guys were right on the money and have been extremely successful. The irony is that this was, and probably still is, the key opportunity for traditional travel agents. Utilizing the community nature of your existing audience.

The other highlighted company was Viator, that sells activities. Again, no point just replicating their website, instead they created a “last minute” activities app, a platform they didn’t have and created in order to run the app.

Both achieved significant success, being featured by apple the holy grail of app release. However it was highlighted that Viator spent millions, both in creation and launch, taking over Youtube across the world.

For those Kiwis out there Air NZ did a fine job showing up the Aussies in its significant worldwide success in social media. With classic underdog lines like -for a small airline at the bottom of the world – we achieved amazing reach. Which they have. I’m looking forward to the launch of the new Air NZ site, as well as Rico’s interviews with Lindsay Lohan and David Hasslehoff.

Although the parting question raised significant debate. The trick with this widespread reach was did it then convert?. Did it sell more airlines seats? The debate centered back on the age old, if its’ social – are you supposed to actually sell something too ?

We then had a panel of the three major airlines, which was tense and jovial. At one point a member of the audience queried Justin Montgomery, GM Virgin about their recent letter to her, a Qantas frequent flyer, offering to replicate her points status on Virgin, “Was this a blatant stealing of customers? ” – “yes – very blatant”. Right then.

To be honest the Qantas man John Lonergan, either wasn’t willing to fight in this context or seemed out of his depth, as he was remarkably quiet with Virgin and Air NZ dominating the microphone.

Around the lunch table, the debate was how Virgin got their list of Qantas Frequent Flyers.

I’ll be upfront, I don’t know a lot about GDS’s, but if you know less than me, it stands for Global Distribution System and there are basically 3 companies that sit as the middleman in the distribution chain of flights and room nights. GDS’s have been significant players, but due to a number of direct to consumer models, aka low cost carriers and large OTA distribution systems, like Expedia – their relevance has been in question.

Martin pushed and probed but each replied with the same pat answers unwilling to fight their cause. Which made them dull and irrelevant.

Regardless of your position, it was apparent that they still made significant sums of money and billions of travel transactions. However in a Traveltech conference, not a single one could point to a clear point of difference amongst the 3 players – particularly in technology innovation.

Thankfully there was not a solid focus on social media, but interestingly as it should be, it was pervasive as part of the marketing mix throughout the talks.

Social is often touted as the free medium, achieving massive consumer word of mouth, reach etc etc for minimum spend. Although the spend might be less compared to traditional mediums like advertising. It was interesting to note of the successful campaigns talked about, social was still a significant cost. Creating video campaigns and hiring agencies is still not cheap. Air NZ and Tourism Victoria have achieved significant success, sure, but they still have reasonable budgets to begin with. For start-ups like myself it becomes far more apparent you still need money to make money – even with social media.

Last but no least – the Traveltech awards for best website – which went to Vroom, Vroom, Vroom, a beautifully functional site for car rental comparison. The criteria for the awards was being an Australian owned and run company. However, Martin has now agreed to include New Zealand companies next year. So watch this space for Fossick next year.