Should Tourism Operators Pay for the Right to Visit Iconic Locations?

A complex and ongoing issue has been going on in the Bay of Islands for many years, but now a Maori Trust has decided to launch a public awareness and protest campaign over their battle with tourism operators who sell boat trips to pass though their privately owned “The Hole in the Rock” (Motukokako). 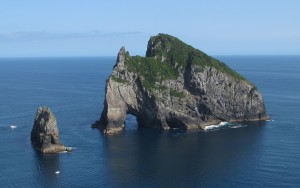 Essentially the Trust believes that any monetary gain by tourism operators who take their boats through the Hole in the Rock should be shared with the owners of the island, similar to how DoC concessions work for various sites throughout New Zealand. However the principal operators involved stand behind a legal ruling siting maritime law that vessels have navigation rights in seaways and also raise concerns on setting a “risky precedent”.

[box]For more background on this issue see this Northern Advocate article “Money, mana row over Hole in the Rock”[/box]

Undoubtedly this is a difficult issue to resolve amongst the parties involved and there’s not necessarily a right or wrong – ideally a mutually beneficial agreement would be obtained, but it seems none of the parties are budging on their views. Opinions will surely be divided, is there a good solution possible that’s a win-win situation?

It would be interesting to get your opinion on this matter, and whether similar issues have occurred elsewhere in New Zealand with a good outcome?

8 thoughts on “Should Tourism Operators Pay for the Right to Visit Iconic Locations?”